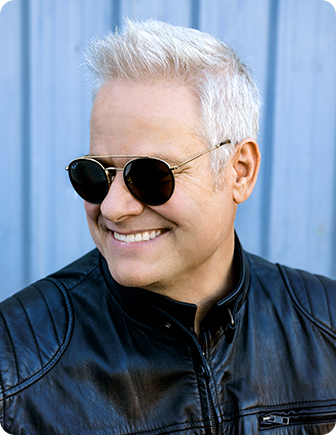 BB Hayes has been a successful DJ, music producer, and actor for over 30 years. In 2006, while sitting on the beach in Miami and listening to CDs on a boombox, he received a vision of the future from his recently deceased father. This vision led him to realize a prophecy of the future and a new goal for the artist. He contemplated his idea, wondering,

“How cool it would be to have the ability to sit here on the beach with a fully self-contained boombox but actually mix like a DJ! I could go wherever I wanted. This will change the way DJs perform forever.”

The following year BB invented his first system: Wireless DJ 1.0. It consisted of a laptop running Ableton Live production software which was combined with a MIDI controller and a wireless, analog, monophonic guitar transmitter/receiver. He debuted the creation by performing with it at San Francisco’s SupperClub. It worked! Although the quality was not that good and it wasn’t mixing exactly like a DJ with two turntables. His goal was to break free from the confines of the DJ booth and be closer to the audience. The full range of sonic frequencies that music made for the club contained were difficult to reproduce wirelessly. There were also issues with latency and trying to create a compact design presented challenges. He had to wait for the technology to catch up.

We now time travel 8 years into the future. The iPad had been invented and digital software for DJs was introduced, but these programs could only run on computers. Furthermore, the software required a DJ to still spin vinyl records on actual turntables. This was far too heavy to carry around and the opposite of compact. There was finally DJ software available on the iPad, but the device didn’t feel legitimate or fit the DJ look yet. Plus, there were still issues with quality and latency. There were some small “All in One” DJ mixer units hitting the market, but they still needed the iPad to be wired.

BB Hayes dreamed of better, so he created the next prototype: Wireless DJ 2.0. Although the transmitter quality and latency were still an issue, the digital automatic syncing software of the audio files worked fairly well. While it was still not perfect, some of the delay could now go unnoticed. BB had to add battery power and create a new chassis to hold everything. The quality of the wireless technology had improved, but it wasn’t quite there yet.

In January of 2020, BB moved to LA to live with his long-time friend, former club owner, and Hollywood power broker John Schneider (brother of comedian Rob Schneider). When the COVID-19 pandemic hit and Californians were asked to shelter in place, solitude drained motivation and created a depression that affected many, including BB. John came to him and reminded him that even though the world stopped, it could actually be an opportunity in disguise. He suggested to BB that he should break out of the funk and start doing what he does best: create!

This was a pivotal moment and the project had begun again: Wireless DJ 3.0. This time when doing the research he discovered that the technology had caught up at long last! Timing is everything. In 2020, DENON had just released an “All in One” DJ unit that was exactly the kind of thing BB had envisioned. It was a compact, battery-powered unit with a touch screen. No laptop or iPad was needed. More music than a DJ could need can be stored internally and the software that once needed a computer was now inside the unit.

The next and most important part was to implement this wireless technology. After talking to his equipment supplier about the issue, he was informed of brand-new technology that had just been released that year. It was a digital wireless transmitter and receiver set by Sennheiser! Digital meant that the full range of frequencies that were out of reach before could finally be achieved and the latency was only 1.9 milliseconds–way too fast for a noticeable delay! The lights became brighter and a heavenly sound filled his ears. Finally!

Drop me a line